This is a big event in every sense, and Liverpool City Council's Culture Liverpool team want to make sure as many people as possible get involved in the run up, during and after the show.

They are working in partnership with other council teams and external organisations to deliver an education and participation programme that aims to bring together the entire city in memory of the events which took place between 1914 and 1918.

If you are planning on organising an event to coincide with the commemorations, please download the form and email it back to us.

Loneliness and isolation are key factors affecting good well-being and can have a serious impact on health. The effects on health have been linked to being similar to smoking 15 cigarettes a day. Older people are visiting their GPs more than ever to combat their isolation but some of our older people are not sitting back, they used the Giants coming back to this city, to get together, to chat about the event, talk about the routes the giants would be taking and how exciting it is for them and their families and how they could become part of it.
Knit and Natter Groups take place across the neighbourhoods of County, Anfield, and Kirkdale in the North of the city and through these groups local older people came up with the idea of knitting a beautiful blanket for the Grandmother while she was asleep in St. George’s Hall - they wanted to keep her warm and safe.
On Wednesday 23rd July representatives of the groups took the blanket to St Georges Hall to visit the Grandmother.
Ann Sullivan, 69, from Aintree, of St Luke's Knit and Natter group, said: "It's absolutely fantastic seeing the Grandmother. We made a massive blanket for her."
She added: "We crocheted the blanket & a scarf for the little girl as well. After it will go for children to sit on at story time." 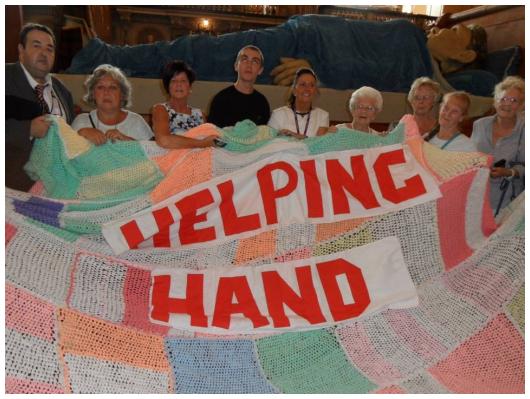